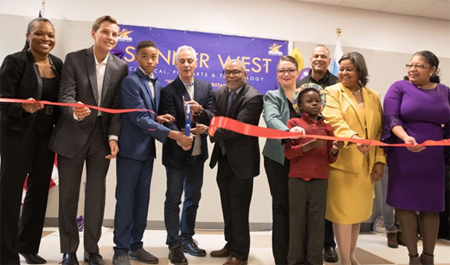 Construction of the four-story, 36,000-square-foot annex began in October 2017 with final costs of the annex totaling $16.6 million (almost $4M under budget). 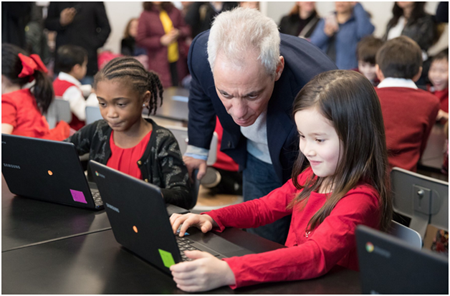 The $16.6 million annex was paid for with CPS capital improvement funds and No Tax-Increment Financing (TIF) funds or Neighborhood Opportunity Fund dollars were used to pay for the project.

Skinner West continues to offer a high-quality education while also surpassing national education milestones. Skinner West was nationally recognized as a Blue Ribbon School in 2013, was ranked as No. 1 elementary school by Chicago magazine and sent a school science experiment on a space shuttle.

This new addition will be an “anchor” for the community and help the school continue to “serve the growing needs of the West Loop,” Clark said. 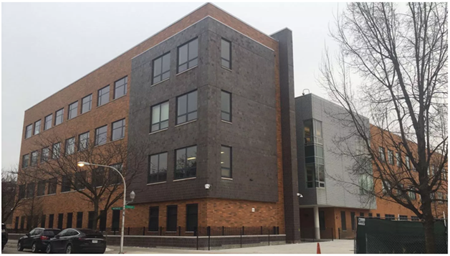 The annex was constructed by the city’s Public Building Commission and includes a new elevator and chiller. The existing Skinner West building also received renovations.

Students Participate in Back the Bid, Back to School Curriculum Teaching Olympic Ideals

Mayor Richard M. Daley today dedicated the new Mark T. Skinner West Elementary School on Chicago’s Near West Side.  The school is one of five new public schools opened this month and built under the “Modern Schools Across Chicago” program.

Skinner, located at 1260 W. Adams St., is a classical school which draws pre-Kindergarten through eighth grade students from all over the city.  It is also a neighborhood school – the first school in the Chicago Public School system to combine the two approaches.

The neighborhood program is offered at the Kindergarten level this year and a grade level will be added each school year until it is fully K-8.

“I strongly believe we must create even more options for our students, including charter schools and performance schools, if we are going to make sure they reach their full potential,” Daley said.

“As we enter this new school year, I’ve asked our school leaders to hold our schools to an even higher level of accountability and excellence than ever.   We must ask more of every student, every parent, every teacher and every principal,” he said.

At the dedication, the Mayor also talked about how some Chicago Public School classrooms are learning about the values of the Olympic Movement by participating in the “Back the Bid, Back to School” curriculum, which was put together by CPS and Chicago 2016.

The new building replaces the old Skinner building, which was more than 50 years old. The 101,000-square-foot three-story building has a planned capacity of nearly 750 students and cost $41.6 million. Since 1996, the City has invested more than $5.5 billion in school capital improvements and built 41 new elementary and high schools.

Named after Mark T. Skinner, a prominent Chicago lawyer and civic leader during the 19th century, the school was designed to achieve a Silver rating under the U.S. Green Building Council’s LEED (Leadership in Energy and Environmental Design) for Schools Rating System.

At its eastern end, the school also features a historic water tower which is being reused to harvest runoff rainwater for irrigation of the landscape.

The “Back the Bid, Back to School” curriculum, put together jointly by the Chicago 2016 committee and CPS, features various activities and lessons plans for students at all grade levels. Many of the lesson plans were created by Chicago Public Schools teachers.

“The Olympics provide opportunity for a ‘teachable moment’ that benefits all school children,” said CPS Chief Executive Officer Ron Huberman. “The Olympic ideals of dedication, fair play, fitness and self-confidence and of welcoming athletes and spectators from all over the world have meaning for even our youngest students.”

“We appreciate the work that went into the curriculum and the efforts of our teachers and Chicago 2016 in putting together this package of teaching tools for our schools,” Huberman said.

The curriculum kit includes a DVD with films that highlight various aspects of the bid.  The films feature Michael Jordan reflecting on his Olympic experience, girls from each of Chicago’s 27 Sister Cities saying “Hello Sister” in their respective languages, and a piece on how World Sport Chicago is helping introduce urban youth to Olympic sports.

There are suggested activities for all grades levels.  One activity encourages 1st graders to make posters about friendship, portraying the Chicago Olympic slogan: “Let Friendship Shine.”

A lesson plan for 8th grade students asks them to contemplate Carl Sandburg’s poem “Chicago,” while they think about the values of respect, hard work, and fair play.

“Our bid is about inspiring young people around the world to participate in sport through the Olympic Movement. It is about teaching children the values that sport in general can offer,” Daley said.

“This is one more tool we are using to take our schools to a new level of success,” he said.

As we all know, weather in Chicago is unpredictable!  The Skinner West Branch (225 S Aberdeen) does have an outdoor playground, but where do our superstars go when the weather turns…too hot…too cold…too wet…?

We, along with Principal Clark, truly believe that working on gross motor skills -  large and small - and offering opportunities for open social interactions provides long-lasting benefits.

In the short-term, our children will have a chance to work out their energy during inclement weather, helping classroom attentiveness.

A separate library & computer lab will help give the children different scenery from their regular classroom and grow their love of reading and technology.  In 2020, superstars will learn responsibility by having the option to check out books!

We are still in need of donations!! Donate $ to Friends of Skinner West with a note 'For Gross Motor Room' or contact Amanda Rzepka amanda.m.rzepka@gmail.com about other equipment, toys, or book donations.